The Line carries the tempo marking of “Fast, savage, grotesque” and was written to commemorate the brutal, forced labour construction of the Thai-Burma railway by the Japanese Army in World War 2. Many Australian and Commonwealth military died or suffered terribly in the building of the railway as did many members of the local Thai, Burmese and Malaysian populations. My work is a setting of my own text and also draws on the Dies Irae movements of the Mozart and Verdi requiems.

Commissioned by the Flowers of Peace and the Australian War Memorial, Canberra the work is about 4 minutes, 30 seconds duration and is scored for large orchestra and chorus. It had its first performance at Llewellyn Hall in Canberra on 29 October 2022 with the Canberra Symphony Orchestra and guests, musicians from the Australian Defence Force, ANU Chamber Orchestra and Choirs and the Brisbane Chamber Choir directed by Chris Latham. 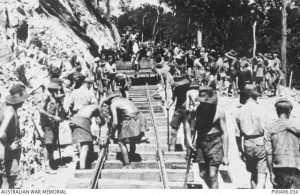 Hear the hammer strike the spike in,

Clear the jungle, vine and bamboo,

Mud and filth and flies and fever.

No food. We drink putrid water!

Beat them, work them, starve them, break them.

Hear the hammer call us back: