The Children’s Bach is an opera by Andrew Schultz in two acts commissioned by ChamberMade Opera with the aid of a Project Fellowship from the Music Board, Australia Council and The RE Ross Trust Playwrights’ Script Development Awards. The work has a libretto by Glenn Perry after the novel of the same name by Helen Garner. The work is set in inner suburban Melbourne in the 1980s and is about 80 minutes duration with a cast of seven including a teenage girl (Poppy) and a ten-year old autistic boy (Billy). The cast is accompanied by an instrumental ensemble of clarinet, violin, cello, double bass, percussion and piano; there is also an on-stage piano that is played by most of the opera’s characters but especially Billy. The work had its first season of 15 performances with ChamberMade Opera in Melbourne in June-July 2008 in a production directed by Chris Kohn and conducted by Brett Kelly and Nicholas Carter. Subsequent seasons have included the Canberra International Music Festival in 2019 with Roland Peelman conducting.

The opera concerns, Athena and Dexter, “who lead an enclosed family life in Melbourne, innocent of fashion and bound by duty towards an autistic child, Billy. Their comfortable rut is disrupted by the arrival of Elizabeth, a tough nut from Dexter’s past. With her sister (Vicki), fickle boyfriend (Philip) and his smart teenage daughter (Poppy), she draws the couple out into a world whose casual egotism and sexuality they had barely dreamed of. Can they get home again?” (Helen Garner, The Children’s Bach, Penguin Books, 1999.) 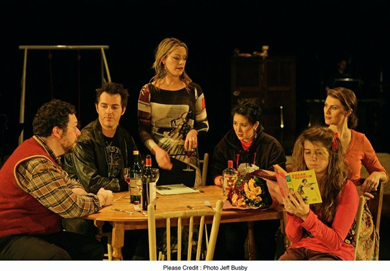 Click here for a free download of the booklet that accompanies the Canberra International Music Festival, Wirripang (Wirr115, 2022) compact disc and digital album recording of the opera – includes the libretto and detailed synopsis.