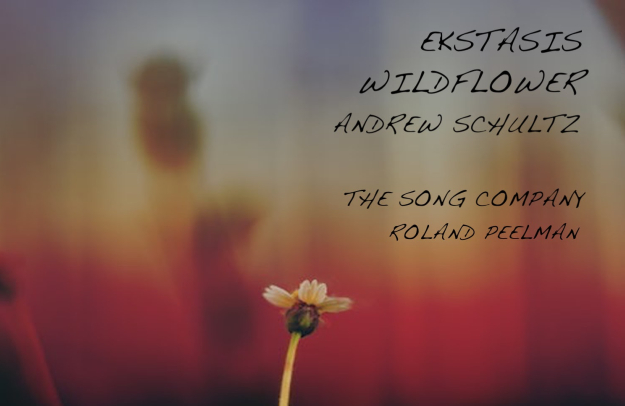 Sedition have released The Song Company’s exciting recordings of Andrew Schultz’s two works for vocal sextet: Ekstasis, op. 43 (1990) and Wildflower, op. 71 (2006). Both works were written for The Song Company and their Artistic Director at the time, Roland Peelman, who conducts the group in these recordings. The new release means that both works are now available for streaming as well as digital download. The recording was released on 11 January 2019 on all major download and streaming services including iTunes, Spotify, Deezer, Napster, Shazam, Pandora etc etc…

“Ekstasis…here was originality indeed, with a multitude of anguished, increasingly urgent and complex sounds emerging from a silence that itself added a dimension, finally sinking into calm. This was ecstasy in a sensual, sexual sense, musically transcribed.” [Sydney Morning Herald]

For love is strong as death,

The flash of it is a flash of fire,

a flame of life itself.

Love no flood can drench

Yet whilst the text is direct and passionate it also has a classical and simple shape, as if the strength of meaning demands a balancing formality of expression.

For love is strong as death,

The music of the piece stems from a few simple sources: a single chord that forms up slowly over a protracted period, sighing glissandi, rapturous moans and calling melodies and a duet refrain that is continuously varied. The work contrasts different possibilities of texture beginning with a solo, then a duet and so on till all six voices are heard. Finally, it closes with a still section – a state of displacement or trance, the literal meanings of the Greek word ekstasis.

Wildflower was commissioned by a Song Company subscriber as a gift for his seriously ill partner on a text he selected for performance by The Song Company. The work was composed in September 2006 and draws its text from the Old Testament prophet, Ezekiel.

At birth, the very day you were born,

There was no one to cut your cord,

Or wash you in clean water,

Or rub you with salt,

Or wrap you in cloth.

No one leaned kindly over you to do anything like that for you.

You were left in the open fields;

You were as unloved as that on the day you were born.

I saw you struggling in your blood as I was passing,

And I said to you as you lay in your blood:

Live in your blood,

Adapted from Ezekiel 16: 4-7, The Jerusalem Bibleby the composer.