The Meaning of Water in Sydney 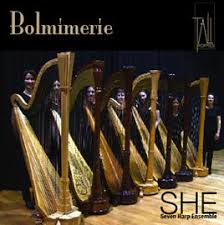 “But the new composition of The Meaning of Water by Andrew Schultz was I felt a masterpiece. It was like a water instrument with gurglings and churnings and words can’t describe it.”
[“7 Women – 7 Harps”, Live Journal,  27 June 2006]

Premiered by the extraordinary SHE – Seven Harp Ensemble (director, Alice Giles) at the American Harp Congress in San Francicso in 2006, The Meaning of Water has attracted frequent performances and broadcasts in Australia and the USA. SHE have recorded the work plus other new pieces (including pieces by Larry Sitsky and Martin Wesley Smith) on the Tall Poppies CD, “Bolmimerie” (TP204). SHE presents The Meaning of Water in their Sydney concert for Musica Viva on Tuesday 10 March 2015.

Led by pre-eminent harpist Alice Giles, the heavenly sounds of S.H.E. open Musica Viva’s 2015 Sydney Coffee Concert Season. A rich and diverse program shows off the extraordinary talents of seven of Australia’s finest harpists in this graceful and spectacular ensemble.

Morning tea from 10am
Concert from 11am for one hour

Tall Poppies CD of SHE including The Meaning of Water: TP204, “Bolmimerie”

Hear the concert on ABC Classic FM on Monday, March 16 at 9:30pm