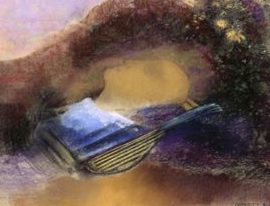 Stille Sprache “opened up mightily impressive vistas. At times quite breathtaking in its scope, it was sometimes difficult to accept that such an expansive musical canvas was peopled by just three performers.”

Stille Sprache (Language of Silence), Opus 81 by Andrew Schultz is a setting of three poems from the first part of Rainer Maria Rilke’s Die Sonette an Orpheus (The Sonnets of Orpheus) for soprano, violin and piano. Felicitas Fuchs (soprano), Qian Zhou (violin) and Bernard Lanskey (piano) recorded the work at the Studios of the Yong Siew Toh Conservatory of Music in Singapore in 2013 (Zhou Xiaodong, audio engineer). The work was composed by Andrew Schultz in Sydney, Australia, in 2009 for the wonderful young German soprano Felicitas Fuchs who gave the work its premiere with French violinist Aki Saulière, and Australian pianist Bernard Lanskey at La Loingtaine in Paris in 2010. Felicitas has since performed it in England, Australia and Singapore and now presents it on this digital-only recording release with Bernard Lanskey and the brilliant Chinese violinist, Qian Zhou.

Purchase on i-Tunes, Amazon and other digital platforms

Image above: detail from ‘Orpheus’ by Odilon Redon  circa 1903