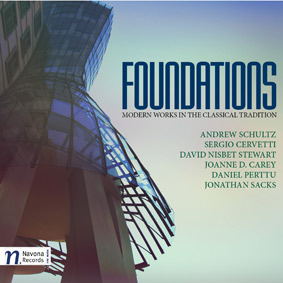 “In a slow tempo, the Magnificat, op. 79, by Andrew Schultz, expresses with extremely soft vocal lines those moments of unease that the young woman, after receiving the visit of the Angel, must feel deeply. The music evolves in a completely balanced way despite the earlier tense uncertainty at the time that the voices were fading in from an enigmatic silence. Schultz writes in the header of the score, a poignant phrase of the American writer Emily Bronte:  ‘No coward soul is mine.’” Sonograma Magazine, Spain

The Kühn Mixed Choir of Prague, conducted by Marek Vorlicek, has released the unaccompanied choral works, Magnificat and Nunc Dimittis by Andrew Schultz on the American label, Navona Records. The works are on the Foundations CD (Navona, NV5939); the CD can be purchased from music stores, the Navona website or on all digital formats. The recordings are also available on the Naxos Music Library on-line.

The Foundations compact disc is unusual in its innovative format.  Besides the music on the disc there is a CD-ROM component of the same disc containing enhanced content: scores, liners notes, texts of the works, and other information. This enhanced content is accessed by placing the compact disc in a computer CD drive and clicking on the relevant icon.

Magnificat has also been released in the same performance on the Navona digital compilation disc, Fine Music, Volume 5.