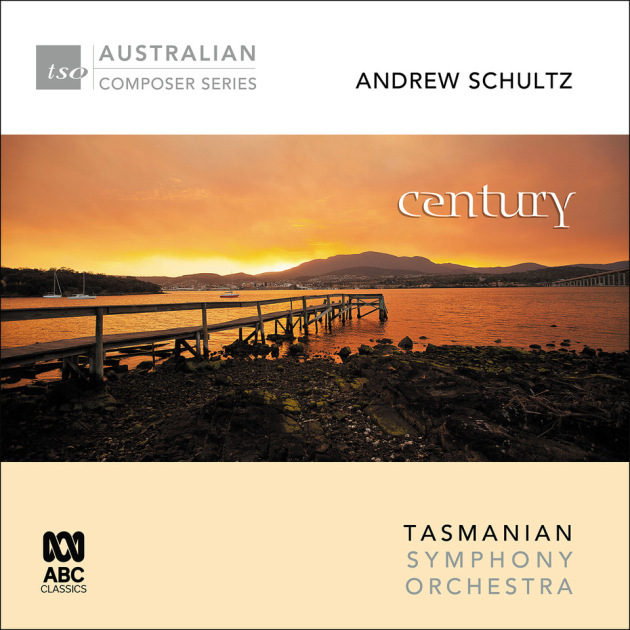 ABC Classics and the TSO announce the latest in their acclaimed Australian Composer Series.

The latest release in the Australian Composer Series features orchestral works by Andrew Schultz: his Symphony No. 3 Century, as well as the works Peace and August Offensive.

Centurywas commissioned for the celebrations surrounding the centenary of Australia’s national capital, Canberra, in March 2013, and premiered in front of an audience of 150,000 people. Chris Wallace of the Canberra Times wrote, “Century is excellent. It is epic. It is powerful and beautiful.” The work speaks to the fascinating history of our purpose built ‘bush capital’, and the struggle between idealism and practicality that was inherent in its construction. It sounds instantly Australian, celebrating the abundance of our natural environment while also warning of its intensity and brutality.

Peace was written in 2013 for the Tasmanian Symphony Orchestra, and takes its name from one of JMW Turner’s best-known paintings, Peace – Burial at Sea(1842). This is not a peace of tranquillity, however – rather the uneasy peace that forms after a period of violence and conflict. August Offensive, by contrast, is a very fast, virtuosic and violent work which was premiered at the ANZAC Day dawn service at Gallipoli on 25 April 2013. Commissioned for the centenary of the Gallipoli campaign by the Australian Department of Veterans’ Affairs, it commemorates the horrendous battles in August 1915 which saw some of the most deadly fighting of the entire campaign.

Born in Adelaide in 1960, Andrew Schultz grew up in regional New South Wales and Victoria before his family moved to Brisbane, where he completed his secondary schooling. His teachers and mentors included Colin Brumby, George Crumb, David Lumsdaine and Luciano Berio and he studied at the Universities of Queensland, Pennsylvania and King’s College London. Currently Professor of Music at UNSW in Sydney, his music has been performed, recorded and broadcast widely by many leading groups and orchestras.

The Tasmanian Symphony Orchestra’s Australian Composer series
is one of the most important recording projects in the history of Australian music,
making available the orchestral works of a wide range of Australian composers,
performed by one of the world’s finest small orchestras.

LINK TO OBTAIN OR LISTEN TO THE NEW CD: