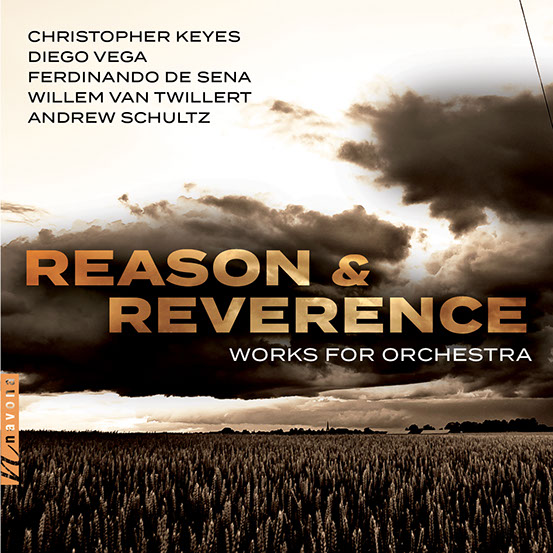 Andrew Schultz’s large-scale 2008 composition for orchestra, Symphony No 2- Ghosts of Reason, has been released on the US label, Navona, as part of a compilation of contemporary orchestral works. The performers in the work are the Moravian Philharmonic Orchestra conducted by Petr Vronsky from the Czech Republic. Full details of the CD are below; individual works on the CD are also available via all digital formats.

“Majestic and dark” – Recent reviews of Ghosts of Reason from Denmark, Italy and the United States.

“The symphony starts with the delicate sounds of a harp like the gentle swaying of grass in the breeze. The breeze intensifies and so do the tones of the harp to a degree that is almost surprising. The brass instruments have joined in although only the harp seems to be noticed. More and more instruments join in and divinely beautiful harmonies fill the room. There is somehow something unknown about it. The violins are not playing the melody. It is the usually accompanying instruments changing roles and taking over the lead. The tempo increases, but suddenly a strange kind of calm descends over the audience. How can it be that the violins continue playing? And yet, all light tones seem to have suddenly disappeared. The double bass has taken control of the orchestra! “I would like to be able to convey the scorched, rich ochre sonority found in the voices of Aborigines”, says Andrew Schultz about his work. He has definitely succeeded in doing so. We, the audience, are spell-bound by this music that takes us on a tour through the desert with whispering wind, through rich and fertile areas with birds flapping their wings, to the coast and the roar of the ocean.

Andrew Schultz’ music is filled with emotions and unexpected sounds. The overwhelming warmth of the music becomes even more striking when you have experienced the intellectual character of the composer. These are sounds that open up for his true self, showing his inner self, so warm and sympathetic. Andrew Schultz’ music touches the soul and speaks to the mind.” [Michael Schäfer, Klassisk Pt 66]

“Andrew Schultz, finally, is the composer of a work of broader and multiform breath, Symphony No. 2: Ghosts Of Reason, Opus 76 that alternates majestic and dark passages, with more shining and luminous openings.” [Luciano Feliciani, Kathodik]

A “compelling, philosophical reflection of the world we live in…Schultz’s composition paints a haunting atmosphere by drawing out the wistful bleakness of its wandering melodies…carrying a reminder that appreciating our phenomenal world comes with both the triumphs of the present and the hauntings of the past.” [Classical Music Discoveries, 28 June 2018.]

Musical forms, like landscapes, seem to be haunted by past inhabitants. I feel this applies to Australia a lot. I remember as a child growing up in Western Victoria, an abandoned place where I used to go to play. It had been a house years before and was just broken building bits with foundations but no walls now plus a fantastic wattle grove – cold but beautiful in winter. The sense of being somewhere remote but lived in before was palpable. Musical forms are like this to me – for an Australian composer, Beethoven and Schubert seem to be wandering the Simpson Desert at times.

Ghosts of Reason – Symphony No. 2 is a one-movement work of about 20 minutes duration. The piece was commissioned for the Adelaide Symphony Orchestra and Arvo Volmer (conductor) as the Schueler Composition Award for 2008. This award was established through the generosity of Mr Norman Schueler and Mrs Carol Schueler, in honour of Mrs Gogo Schueler. The piece was composed in 2008 immediately after the opera The Children’s Bach during a ‘double winter’. It was sketched out whilst in residence at the Banff Centre for the Arts in Canada in a tranquil snowbound studio. The work was then completed on the coast south of Sydney where stillness is replaced by invariably brutal, winter Southerlies.

Starting out on the piece I had in mind the aspiration to create a prolonged sense of yearning mixed with silence and space but balanced by a sustained, rolling and uplifting climax. As Dante put it in the Divine Comedy, “And so we came forth and once again beheld the stars.”