“Music assumes an integral role in Helen Garner’s The Children’s Bach. Each character finds solace in its embrace, none more than the unlikely adultress, whose stiff, unfeeling rendition of Bach preludes provokes the memorable line: “If only those birds sang – that sang the best – how silent the woods would be.” It’s Garner’s gift to have an ear for the lyricism and complex drama of life’s second-rate warblers, and to weave them, with the lightest of touches, into elaborate harmonies.

Athena (Kathryn Grey) and Dexter (Andrea Carcassi) are happily married, their lives tinged with sadness by a profoundly autistic son, Billy (James Christensen). By contrast, Elizabeth (Dimity Shepherd) and Philip (James Egglestone) are loose-living bohemians. When the couples converge, Athena and Philip embark on a mad fling that cannot last.

Schultz and Perry’s opera faithfully recreates the novel’s inner- suburban world and its central romantic collision. The score plays on the book’s musical references while remaining utterly original. It employs everything from jazz-inspired riffs to fugal structure to accompany the progression of romantic entanglements. A wild arrangement for marimba evokes the disorienting jungle of Billy’s mind. In a striking scene straight from the book, Elizabeth’s sister Vicki (Tess Duddy) sings the Skye Boat Song while Billy hums wordlessly along. And the novel’s conclusion is sung, effectively, as a rising, speculative duet…

The production is imaginatively staged…and succeeds in creating the sort of intricate interiority (a difficult thing to do in opera) that ultimately does justice to the book.” [Cameron Woodhead, The Age, 23 June 2008.]

“For those unfamiliar with Helen Garner’s novella, this review shall not spoil the details of the story as retold in this operatic adaptation. Not that plot is so much a driving force in this tale, but the developments of the fragile relationships depicted are an essential part of its dramatic strength. In essence, it is a tale about emotional isolation in suburbia, the loneliness and disappointments within relationships, and the escape and damage of seeking solace or excitement outside of them.

As Dexter (Andrea Carcassi), one of the main characters, keeps pondering, is this “modern life”? Is this all it amounts to? What kind of abstraction is love in the face of seemingly far more potent pain and disaffection? Needless to say, this is not a particularly cheerful piece, but whether it is actively depressing or alienating depends very much on the temperament (and experiences) of the audience members themselves. Mercifully avoiding high angst, The Children’s Bach is a slow-burn exploration of some of the less dramatic or glamorous facets of “modern life”.

The score is certainly quite beautiful, powerful and oftentimes even rather haunting. A rich, surprising and complex piece of composition, the music alone is worth the price of admission, and Andrew Schultz is to be congratulated. Librettist Glenn Perry has taken on the challenging task of adapting Garner’s often quite prosaic words into something compatible with the operatic voice, while never betraying the essential flavour of the suburban doldrums. All this may seem “a bit too modern” for more traditionalist opera patrons, and any of those still suffering from a bit of Cultural Cringe may have trouble accepting such fine singers passionately intoning lines about Hills Hoists and Video Hits.

The cast is uniformly of a high standard, as much a well-rehearsed ensemble as the excellent musicians who back them. Although each of the performers got some shining moments, the most cumulatively prominent role was that of Athena, powerfully portrayed by Kathryn Grey. An engaging performer, Grey was both powerful and understated, emoting a range from disaffection to despair while never seeming for a moment to be extravagant. Indeed, for a character who could come across as fairly unsympathetic, Grey, rather than attempt to make the role more likable, has the confidence to simply be compelling enough that any such judgmental perceptions quickly slide away.

One aspect of this production that particularly stood out was the set design, with no walls or boundaries in the large empty space afforded it in the Merlyn Theatre, but rather… islands. Islands of furniture, little set-pieces (literally) as though individual rooms reduced to their barest essentials of function. A television and a couch. A dining table. A bed and wardrobe. A rabbit cage. All these little nuggets of naturalistic living spaces plopped down in the dark, featureless landscape of the theatre made them seem almost as though suspended in space and time. It served as a tremendously effective visual metaphor, perhaps, for the isolation and emotional distance between the characters, and even the compartmentalisation of different parts of each individual’s life. Many have used a similar approach to set design before, but have rarely achieved it so evocatively. If anything, it seemed that the sprawling set was under-utilised, but perhaps the extra “settings” that were not really used provided a visual purpose as much as a practical one, as though to suggest that this isolation spreads on forever.

While it has the potential to leave some viewers cold, others may well find this new opera to be a very compelling and moving experience. The Children’s Bach might be exploring the seemingly mundane, but in many respects it is within reaching distance of the sublime.”  [Jack Tiewes, Australian Stage Online, 27 June 2008.]

“Schultz’s songs however often catch the ear, almost at times like a musical, … as when Philip sings to Poppy about his beloved Paradise Bar, or Dexter about ‘lerv.’ While the score is not accessible in the manner of Glass or Adams or, more conventionally, Golijov, nor is it the jagged modernism of an earlier Schultz opera, Black River (1989, film 1993). The composer’s score is lyrical and pervasively melancholic, save a joyous, dancing, unsung passage and the opera’s baroqu-ish duet coda. Not surprisingly it’s the Bach-ian texturing and pulsing of the score that gives the work warmth and drive. Each of Poppy’s readings from her ‘Children’s Bach’ seem to trigger the requisite realisation of the theory from the orchestra, driving the opera on but also adding to the sense of moment, a certain thoughtfulness, a musical reflectiveness. Schultz’s score sings, muses and dances and is superbly realised by the onstage conductor (Nicholas Carter alternating with music director Brett Kelly) and fine instrumentalists on piano, cello, clarinet, double bass, marimba, vibraphone and violin.” [Keith Gallasch, Real Time Arts, 2008.]

“Garner’s poetic and elusive book “translated very effectively into a lightly –scored and evocative chamber opera which took the central metaphor of the fugue from the novel. This became a meditation on the messiness and complexity of human relationships, one given a sense of structure by music.” [Michael Halliwell, “Fly Away Peter: when Australian literature goes to the opera,” The Conversation, 1 May 2015.]

“In 2008, however, a chamber opera, based on The Children’s Bach, composed by Andrew Schultz to a libretto by Glenn Perry played for fifteen days at The Merlyn Theatre in Melbourne. Garner attended one rehearsal expecting to feel little more than intellectual interest in the adaptation of her book, but when Dexter stood up and sang she was powerfully moved: ‘this rush of emotion came over me and it plunged me into the past, because people that you’ve written about die. The idea that Dexter, that character I wrote, that a young man who’s young enough to be the real Dexter’s son, is now getting up and singing…that’s thrilling to me.’ [Bernadette Brennan, A Writing Life – Helen Garner and Her Work, (Text: 2017), p.78.]

“A new production of an Australian opera is an unusual event. The performance of Andrew Schultz and Glenn Perry’s 2008 opera, The Children’s Bach, as part of the Canberra International Music Festival, was refreshing and welcome….

This is an opera essentially about music, and the role it plays in the lives of the characters. Roland Peelman – one of Australia’s most versatile musicians – conducted the small ensemble with flexibility and precision, neatly segueing through Schultz’s stylistic musical amalgam.

Peelman also staged this concert performance, always a challenging task given a lack of stage space. Schultz’s expressive and highly varied score was vividly brought to life in what is a challenging venue, not ideally suited to operatic performance. Peelman expertly brought out the myriad colours and rhythmic variation in this highly engaging music.

The incorporation of Bach’s music into a variety of musical idioms in Schultz’s opera echoes Garner’s use of music in the novel, as a meditation on the vicissitudes and challenges of contemporary urban existence. These characters are all are a complex mix of conflicting desires and emotions, reflecting the deep humanity of the novel.

The final poignant moments as Elizabeth and Vicki sing an extended duet describing how future events in the house will play out – a musical ending with strong undertones of Bach – will long linger in the memory.” [Michael Halliwell,  “Helen Garner’s musical metaphors come alive in a new production of the The Children’s Bach. Review: The Children’s Bach. Canberra: Fitters’ Workshop. Friday May 10, 2019,” The Conversation, May 14, 2019.] 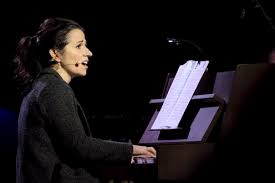 Natalie Christie Peluso in The Children’s Bach, at the Canberra International Music Festival, 2019.

“Schultz produced his 120-minute score in just seven months. It was commissioned by Chamber Made with the aid of a Project Fellowship from the Music Board of the Australia Council and the R.E.Ross Trust Playwrights Script Development Awards. It was first performed by Chamber Made at The Malthouse, Melbourne, in June 2008. The Canberra performance, just over a decade later, is the work’s first outing since its premiere.

In a sense, that is both sad and revealing, because The Children’s Bach should be a gift to Australian regional opera companies. It has a contemporary Australian setting with which many of us can identify and is scored for modest resources, a cast of seven and a chamber ensemble of six. Unlike the astringency of Schultz’s earlier opera Black River (1988), this work has a softer palette and invites comparisons with the likes of Bernstein’s A Quiet Place, both in terms of its musical language and domestic setting…..

The ensemble sextet was centre stage, with director Roland Peelman conducting from floor level. Without enlarged stage settings and direction, lighting and costuming, the focus fell squarely on the music. As it should be, one might say: Schultz is a deeply thoughtful composer, with a sophisticated yet not intimidating language of his own. His music throws up ideas and debate long after a performance has ended.” [Vincent Plush, The Children’s Bach (Canberra International Music Festival), Limelight, 11 May 2019.]

“At last, a recording of the 2008 chamber opera by Andrew Schultz…It was the towering highlight of the Canberra International Music Festival in 2019…and the same expert cast of seven singers and six instrumentalists is heard here…The title is derived from a volume of 20 short piano pieces by Bach, the sort of publication that nestled near piano stools across Melbourne for decades. Unlike Schultz’s earlier operas, this one is more soft-edged and interior, with undulating melodies and gracious accompaniments…The music and subterranean, seething drama unfurls over 29 tracks, providing the kind of introduction to Bach’s music imparted by generations of suburban music teachers. Memories of our musical past will spring from concentrated experience of this masterly score, which deserves to be taken up by companies throughout the country.” [Vincent Plush, “Music Reviews,” The Weekend Australian, 10 September 2022.]