Nocturnes and Variations premieres in Brisbane 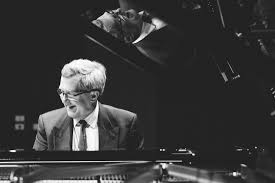 The first performance of Nocturnes and Variations for piano, opus 96 (2014) will be given by Stephen Emmerson (in photo above) in Brisbane in October. The work is a 15 minute, three movement piece commissioned by Stephen Emmerson and Griffith University. The two outer movements are nocturnes and the middle, larger movement is a set of variations. Stephen plays the work in a concert of piano music at the Ian Hanger Recital Hall, Queensland Conservatorium of Music, Griffith University, Grey Street, South Brisbane on Wednesday, 28 October at 6:00pm.

“In unlit places without streetlamps or yelping neon, night is profound and often comes as ease. Relief from looking out for and away from.” [Toni Morrison, Love]

This 15 minute work was completed in early 2014 and was commissioned by my friend, the wonderful pianist Stephen Emmerson, to whom the work is also dedicated. The two outer movements are nocturnes and the middle, larger movement is a set of variations. The two nocturnes are muted and atmospheric night pieces that unfold slowly but with more jubilant passages at their centre. The outer movements frame the larger central variations movement. In all there are 31 variations of four bars each, based on the harmonically ambiguous but simple four bar chordal theme that opens the movement. Each variation draws on the opening material of the theme but also takes up the material of the surrounding variations; hopefully, that achieves a kind of organic flow and dramatic shape in the overall set of variations.

PS. Read about Stephen Emmerson’s recent performance of the work in February 2016 in Singapore:

“…this was a performance which did not so much shed light on the music as illuminate it warmly from within….That is certainly what Emmerson did with the haunting set of variations written for him by Andrew Schultz. With its echoes of Peter Sculthorpe, this captivating piece added to the growing sense that a distinct musical language is coming out of Australia which is as unique and starkly beautiful as the land itself.” [Marc Rochester, “A rare chamber treat,” The Straits Times, 20/2/16.]