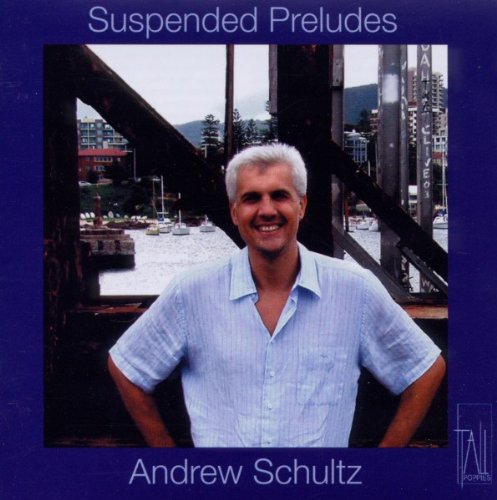 Suspended Preludes is the title of a new CD (Chamber Music of Andrew Schultz Volume 2) that has recently been released on Tall Poppies (TP171). The disc contains Barcarole, From Fire Country, Night Flight, Respiro/Simple Ground, Sleepers Wake – Karalananga, Stick Dance III, Suspended Preludes, 12 Variations and Tonic Continent. Writing in Music Web International, Bob Briggs said the “question some people will be asking is, ‘is this Schultz guy worth investigating?’ and the answer, most certainly, is yes. He has an appealing style which, although seemingly difficult at times, can easily be understood in writing which is idiomatic for the instruments he uses and is always colourful and interesting. And what’s more – he can write truly fast music. The performances are very committed and the notes full and very helpful when making your way through new works. The recording is very clear with good balance between all the players. A real success and well worth investigating.” Read the full review here.

Writing in Fine Music (November 2008) Phil Vendy gave the disc five stars and said, “Schultz moves like quicksilver from one instrument to another, from an energetic mood to a pensive one, never dwelling in one spot long enough to lose the sense of the unexpected. Much to enjoy on this most interesting and rewarding CD.”

ABC Classic-FM have released this 1992 orchestral work in a recording by the Sydney Symphony Orchestra conducted by Yakov Kreizberg at the Sydney Opera House in 1993 in an audio-on-demand format. It can be listened to on-line by following this link.

ABC Classics have recorded three orchestral works by Andrew Schultz with the Tasmanian Symphony Orchestra conducted by Richard Mills for release in 2009. As well as Endling and Once upon a time… the recording features the brilliant young British violinist Jennifer Pike in the Violin Concerto. Read more about Jennifer Pike here.

Some recent interviews and articles

Finally, Andrew Schultz has been awarded a Fellowship from the Australia Council for the Arts to compose eight chamber works over the period 2009-10.