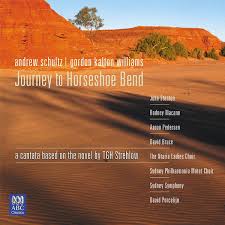 Once upon a time… for orchestra; The Queensland Orchestra/Mills, 21 & 22 June 2007, Queensland Performing Arts Centre, Brisbane.

Journey to Horseshoe Bend, was a finalist in the 2006 AMC-APRA Awards for Best Vocal Work. The CD of the work was labelled one of the best 80 CD releases in 2006 by the Sydney Morning Herald. ‘Cantata Journey’ is a 30 minute documentary film about the work made by Hart Cohen and screened on ABC-TV in May 2006; the film is available from AMC (see the purchase link on the home page). On ABC Radio National the work was featured in the program ‘The Rhythm Divine’.

Some notable recent performances include:

little tree by the Melbourne Symphony/Noble at Hamer Hall in Mlebourne in December 2006,

Night Flight by Niki Vasilakis (violin) and Kristian Cheong (piano) at the Elder Conservatorium in Adelaide in September 2006,

12 Variations for piano duet by Fusion Piano Duo at the Bangalow Festival in August 2006,

Journey to Horseshoe Bend (excerpts) at the Alice Springs Desert Festival on a sound stage in the dry bed of the Todd River in September 2006 by the Ntaria Ladies Choir and the Darwin Symphony/Jarvis/Griffin, and

The meaning of water for seven harps by the Kioloa Harp Ensemble in San Francisco in July 2006.

Winter Ground for solo vibraphone has been recorded by Claire Edwardes for release on Tall Poppies.

Etudes Espace for solo organ has been recorded in the Melbourne Town Hall by Calvin Bowman for release in surround sound format on Melba Records.

As for bass clarinet and piano has been recorded by Henri Bok for CD release in Holland. The CD, “In a nutshell” features new pieces by composers with whom Henri has worked during his 30 years as a Professor at Rotterdam Conservatoire. As had its premiere in November 2006 in Rotterdam.

Chamber Music Volume 2 will soon be released on a Tall Poppies CD. It will include From Fire Country, Barcarole, Suspended Preludes, Sleepers Wake – Karalananga, Respiro/Simple Ground, Stick Dance 3, Barcarole and 12 Variations played by musicians from Brisbane, Melbourne and London.

The film version of the opera, Black River was one of a number of films by Kevin Lucas and Aanya Whitehead presented at a festival of their work in Paris in March 2006.