Antony Gray is the pianist on a new compact disc of Andrew Schultz’s music for piano. The music was written in the period from 1987 to 2015 and includes most of his output written for solo piano during that time. With his amazing virtuosity, the well known Australian born and  international pianist, Antony Gray, demonstrates his expressive control of phrasing and colour throughout the recordings. The recordings were made in Melbourne and London; works on the disc include Barcarole, Prelude and Postscript, and Four Inventions from The Children’s Bach. In a recent review of another work on the disc, Nocturnes and Variations, one critic wrote,  “this captivating piece added to the growing sense that a distinct musical language is coming out of Australia which is as unique and starkly beautiful as the land itself.” [Marc Rochester, “A rare chamber treat,” The Straits Times, 20/2/16.]

The CD is released by the Australian label Wirripang and carries the catalogue number, Wirr 078.  The disc has also been released on digital platforms and via the Naxos Music Library.

Click here for more information, to hear samples of the music, and to purchase the disc.

Some recent reviews of the new disc:

“Andrew Schultz’s impressive piano music collection is deeply rooted in the unique resonant qualities of the instrument. His long-time collaborator, Antony Gray, interprets the works with both sensitivity and panache.”  [Read Michael Hannan’s review of the disc in full in the Music Trust E-zine.]

“Schultz’s piano works range as widely as the great outdoors.

Antony Gray is a London-based pianist who has gained praise for his recordings of Poulenc, Bach, Brahms and Goossens and one can see his skill with these composers fertilising this new disc devoted to Schultz’s pianistic output. In the Adelaide-born composer’s music there is a sense of space, which is entirely appropriate to the vast Australian landscape; and unlike many earlier composers, Schultz is content to write in a more neo-tonal manner without resorting to dissonance or mimicry of bird-cry.

Even in his recent Interludes (2015), there is a sense of late-Romantic intensity. And though Schultz does not regard himself as much of a pianist, there is much here – a sparseness of creative landscape, which defines modern notions of Australia. His music is more melodic than atonal, and yet almost naively deductive in its sense of logic, place and space. Here is music that is haunting and inward, searching for a sense of landscape if not comprehension.

Schultz’s literary influences are disparate – from the 10th-century Japanese Pillow Book to Inventions from his own opera The Children’s Bach after Helen Garner’s touching novella. His counterpoint is all so appropriate, making even more sense of the Bach adopted by the primer of Garner’s title, with a feeling of improvisation and expanding beauty in the right hand, set against gently resolving chords in the left. For those who wish to disappear into the seemingly understated, there is little need to look further.”

A review of the disc by Vincent Plush as published in The Weekend Australian on 10 September 2016. 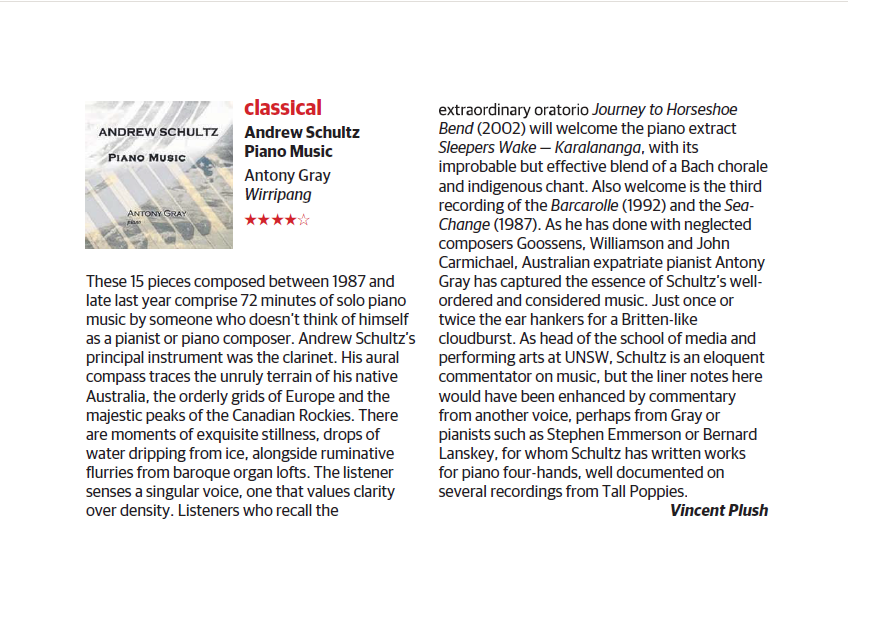